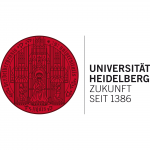 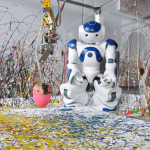 Hi! We are members of the "Optimization, Robotics and Biomechanics" group at Heidelberg University. As a group, we use dynamic simulations and applied math to analyze human motion. Most of the time, the focus is on improving humanoid robots or human-robot hybrid systems such as people with prostheses. The research question that led to our participation in this contest is a little different. We were interested in the role of dynamic motions during the creation of action paintings, the type of artwork made famous by Jackson Pollock in the 1950s. It has been hypothesized that a contemplator tries to reconstruct the artist's motion while looking at this type of painting. To look into this, we performed motion capture experiments with artists, but to evaluate our analysis, we also needed a way of reproducing the recorded motions and create new paintings. Hence, we built the robot JacksonBot, who is already retired, and its successor JP2, whose paintings we present in this contest. The robot motion is generated by a mathematical algorithm that uses a certain cost function as input. These cost functions do not determine the robot arm's trajectory but rather its way of moving. Examples of simple objective functions are "maximized jerk", "stable velocity"or "minimal energy consumption". For the paintings presented in this contest, the cost function is either chosen freely or inspired by the cost functions identified in the recordings of human painters. We are very exited to see if the evaluation of our paintings will be different if the cost was inspired by a real artist. ;) To avoid confusion: Our team photo shows the retired JacksonBot posing with his friend Nao, not the currently used JP2 robot.