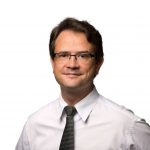 We are a research team in the ABB corporate research center in Ladenburg. We usually deal with industrial applications, but as part of our creative work, we tried to make our two-arms-robot Yumi painting a portrait within a minute. So our goal was not a long painting procedure, instead we wanted a quick painter. We gave us one week from the idea to the result. We separated our team into three sub-teams. • The first team developed a software that does the photo of a person at a notebook and generates a vector graphics out of it. • The second team developed a software that takes the vector graphics and generates the robot targets. The robot targets are finally collected in a big array, which is submitted to the robot controller. • The third team developed the robot program that takes the array and moves the robot along the array, including the up and downs of an arbitrary pen. In preparation of the real painting, we simulated the painting process to ensure the correctness. So, accidentally, we did a virtual painting. The robot program is by the way static: it never changes from portrait to portrait. The overall process starts with making a photo of the person to be drawn. Within seconds, the robot starts painting. The overall procedure and the final result is provided in a movie. This is not a commercial application, we did it for fun and to learn.