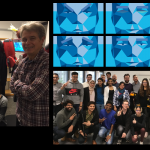 At Halmstad University in southern Sweden, our group, HEARTalion, is investigating how to build semi-aware systems which can support people's well-being through interactions. We believe that one way in which technology can be used to help people to feel better is by expressing emotions in art. For example, such a system could help people with autism, depression, trauma, or alexithymia (difficulty recognizing one’s emotions) to communicate, visualize and investigate their emotions. Last year we participated in the robot art competition for the first time, investigating emotion recognition using a brain-machine interface and heuristics for conveying emotions through colors, lines, and composition. We felt that the resulting paintings expressed some emotions, but our robot, "Rob Boss", painted with a frozen, blank face--sort of like a computer printer. So this year we wanted also the robot to show emotions, and therefore have tried to add an aspect of performance. Thus, Rob Boss has tried to show various emotions while infusing them into its artwork, using its face, voice, and motions. Furthermore, emotions were expressed minimally in a single line, trying to leverage the large degree to which human brains are rigged to be sensitive to anthropomorphize and perceive cues in fellow humans. For example, even a small curve can be a powerful indicator of emotion if it is perceived as an upturned or downturned mouth. And, to breath some extra "life" into the paintings, we asked 24 master's students at our university to generate backgrounds by running five small robots (designed as rescuers in a disaster scenario) with paint brushes over the canvases, as part of a robotics course. On the side, we have also made some general purpose interface code available for controlling a robot like ours (https://github.com/martincooney/BaxterDemo), and we intend to report some of our results at a workshop in April (https://kmitd.github.io/recoding-black-mirror/) and as part of a journal article, to be submitted this summer. (Note: The "HEART" of HEARTalion stands for "Halmstad university Emotional Art RoboT", and "alion" is just for fun. We are a group of academics and artists.)