For this artwork we also collaborated with Liat Grayver. Together we decided to create a painting that combines two styles that we had we recently investigated. One style is based on “procedural” rules that produce stroke patterns on a 2D plane, and the other consists of our “traditional” approach that automatically reproduces images using visual feedback and by deriving every parameter — brush stroke orientation, colour and other information — directly from the input image. As we are fans of Jackson Pollock paintings, we decided to create a work that would pay homage to him. We decided to use a famous picture of Pollock painting in his studio as a reference and employed these two styles for different parts of the painting. • PROCEDURE: First, e-David created the two paintings using the procedural approach (see https://robotart.org/projects/procedural-painting-2/). We recorded the brush stroke sequences for both procedural paintings so that we could reuse it later in this project. Then we created a 3D Scene of e-David standing in a room, in a scene resembling the original Pollock picture. We then rendered the scene from a fitting perspective and extracted lighting, shadow, colour and geometric information to derive painting parameters that can be used by the visual feedback algorithm. We distorted the recorded brush strokes of our procedural paintings according to the perspective of our studio scene and painted them on the canvas. In doing so, we have the exact paintings that we previously generated, now inserted and integrated into the final painting, our “Homage to Jackson Pollock” 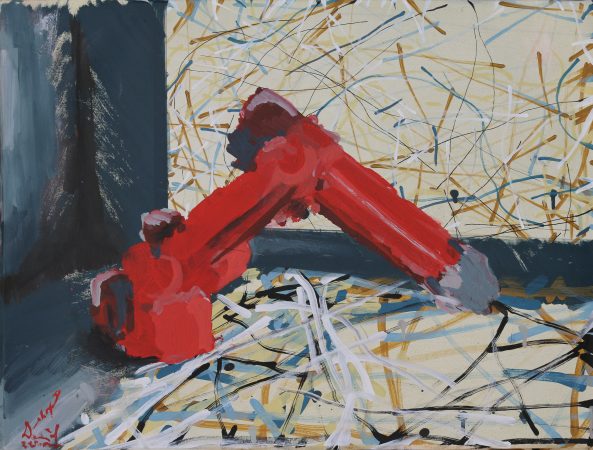 Photo (studio lighting) of the final version of “Homage to Jackson Pollock”, created by the e-David as the result of a collaboration between Thomas Lindemeier (programmer) and Liat Grayver (painter). Acrylic on canvas, 80x60 cm. 2016. 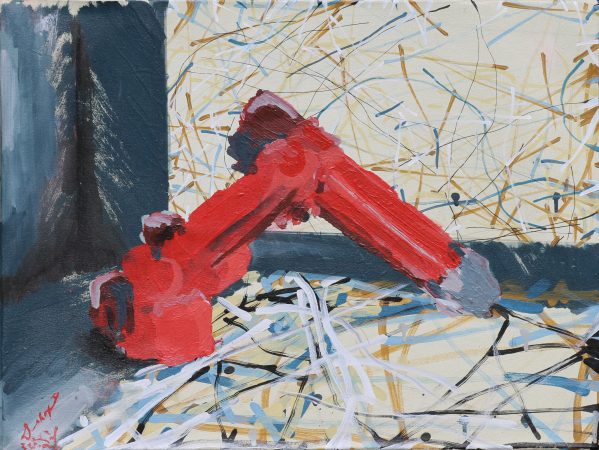 Photo (natural lighting) of the final version of “Homage to Jackson Pollock”, created by the e-David as the result of a collaboration between Thomas Lindemeier (programmer) and Liat Grayver (painter).

The image we used as reference and inspiration for “Homage to Jackson Pollock” is one of Hans Namuth’s well known photographs of Pollock painting in summer 1950, the year before he made his famous 10-minute film on the artist. [Source: Lore Mariano, “Jackson Pollock’s ‘Number 1A, 1948’; or, How Can We Be Abandoned & Accurate at the Same Time?” http://terraingallery.org/art-criticism/jackson-pollocks-number-1a-1948-or-how-can-we-be-abandoned-accurate-at-the-same-time] 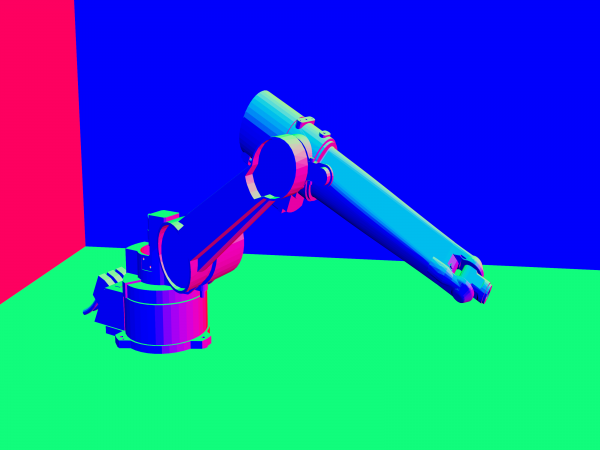 This is a an image extracted from the 3D Scene created in Blender. This image image encoded the surface normals of the robot model. We used the object normals to create orientation fields to guide brush strokes inside the robot region. 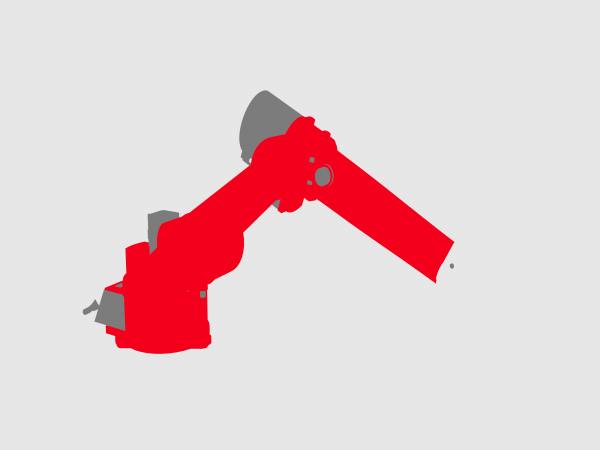 Digital hue map (extracted from the 3d Scene) of the robotic arm that was used to select the colour for the colour blocking step during the creation of the painting. 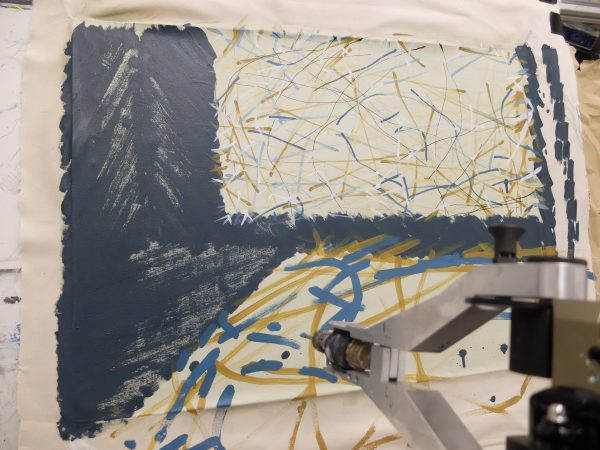 Early photo of the painting. 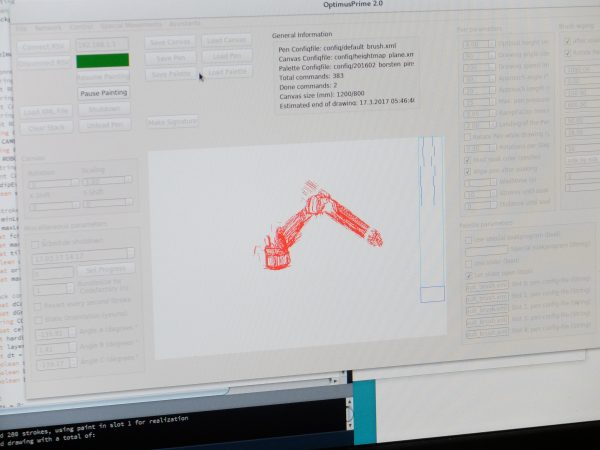 Screenshot of our control server interface. 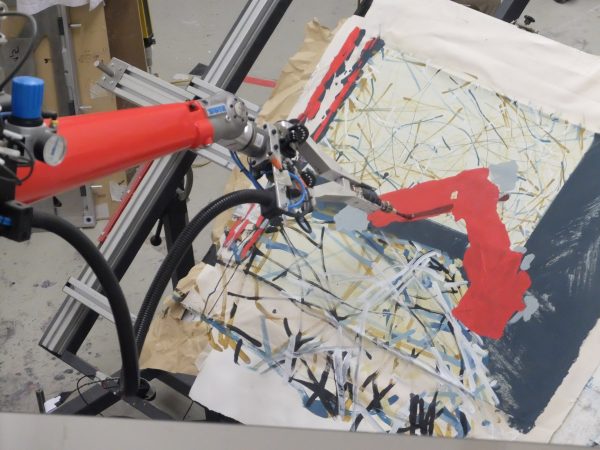 Another intermediate step. e-David starts to apply the shadows after blocking in the hues. The photo was taken from the mirror mounted above e-David that we use to watch it paint from a safe angle. 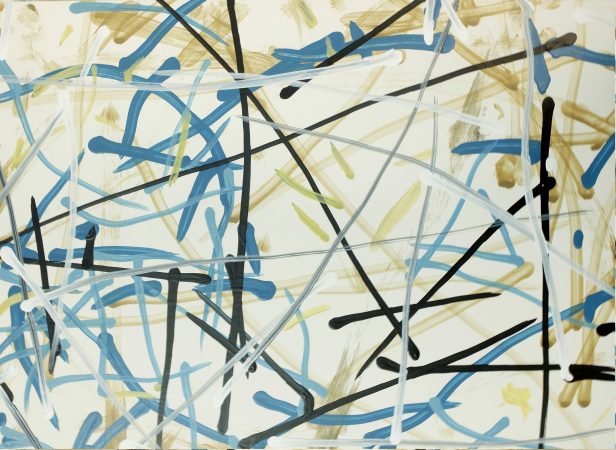 The original painting created by the procedural algorithm. This painting lies on the floor in the final painting (see also https://robotart.org/projects/procedural-painting-2/) 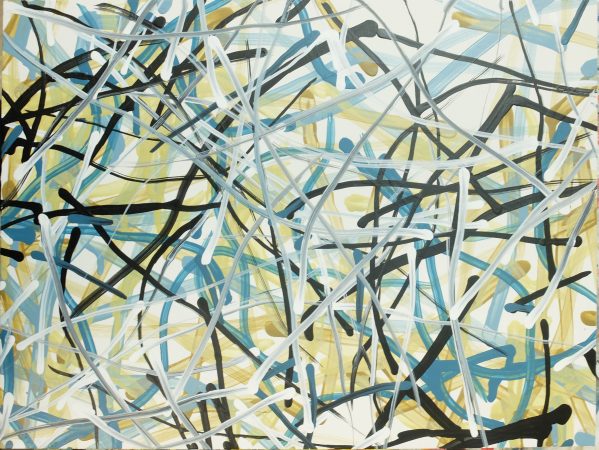 This is another original painting created by the procedural algorithm. This is the painting, which hangs on the wall in the final painting (see also https://robotart.org/projects/procedural-painting-2/).

We mounted a GoPro to e-David and recorded a sequence of brush strokes applying the color hue to the robot arm in the final painting. 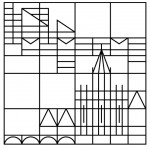