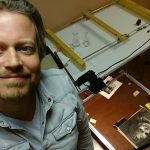 Epenko was founded by Sander Idzerda. He has worked very closely with Floris van Manen without whom Epenko could not have existed. They both share a passion for drawing, light, form and technology. About three years ago, in an attic in Abcoude (Amsterdam), the foundation was laid for Epenko. The first drawing machine was built using new technologies such as a 3D printer. Thinking about how to draw, and to improve has always kept being interesting. First a lot of pendrawing were made, but now more often acrylic paint is used. With a brush. Epenko is the name given to the robot. Epenko can paint without human interference, but often (not for this contest) Epenko and Sander work together on a painting. Smaller paintings are sold via some shops in Amsterdam, often smaller paintings of birds, just because they make people happy. Sander studied mechanical engineering and business administration, but makes a living as an online consultant doig webanalytics and online marketing. Floris his friend and neighbour learned him to become a better programmer and .

cruijff drawing with pen and ink