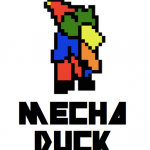 We are on a few FIRST-robotics non-profit team members. we're all in high school and really like doing projects like this so we have "backgrounds" in mechanical and software design. we also like bob ross. We are Associated with our school robotics team, RedAlert 1741, and benefit their non-profit organization in this event. Our robot BotRoss was built on a near zero budget and is mostly made from recycled materials and components. BotRoss uses a single brush and a watered down tempera paint that mixes well on the canvas. The 2 axis Wrist and z axis assemblies are moved along the y axis by a single 12 volt 2 phase stepper motor and screw that were recovered from an old printer and is driven by an Arduino shield. the entire y axis assembly pivots around the canvas drum on a large 12 inch bearing driven by another stepper motor. BotRoss is controlled by a Java Program Running on the companion computer and movements are instructed in the form of depth, color, starting point, and a curve equation.